ICCAN on Aviation Noise or see below 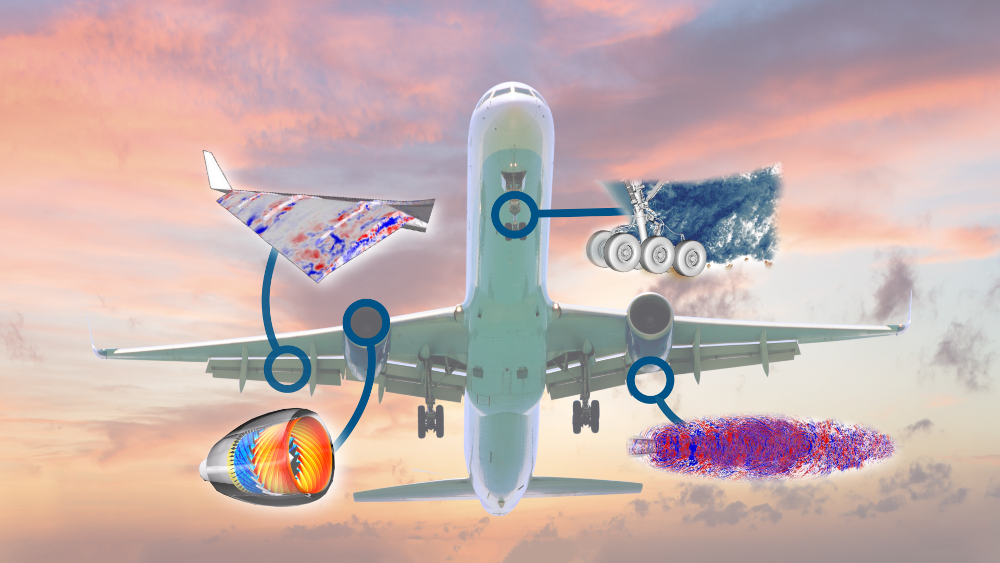 The sound generated by an aircraft is affected by a range of factors. These include variations in the aircraft itself, engine type, size and loaded weight of the aircraft. There are also external factors such as changes in wind and weather conditions.

What is the Difference between Sound and Noise?

Sound is caused by the vibration of air particles. This creates waves of high and low pressure, which are picked up by the ear and processed by the brain. A sound becomes a noise when it causes an adverse effect on the listener. This is because the sound is unwanted and it starts to cause annoyance due to it being unpleasant, undesired, irrelevant or never-ending.

What causes a sound to become a noise depends on many factors, such as its character, frequency content, the duration of the sound and when the sound occurs and whether the sound was unexpected. Much of the distinction between sound and noise depends upon the listener, their circumstances and state of mind.

What is Aviation Noise?

Aviation noise is caused when aircraft taxi, fly, take-off and land. All aircraft produce some noise, however loud or quiet they are. The noise varies between aircraft types and even between aircraft of the same model. How this noise is received (by a person or microphone) at ground level will also vary. The noise from aircraft can be affected by many different factors, including temperature, humidity, engine size, loaded weight and wind speed.

Why do we Measure Noise?

Noise is considered a type of pollution which can create annoyance and health issues. Research is increasingly finding that aviation noise can lead to both stress and sleep disturbance, both of which can have negative impacts on health.

Measuring aviation noise enables airports, regulators and policymakers to understand both who is exposed and what the potential impact on the communities may be. It helps to inform policies for regulating noise. For regulation to be effective, it is necessary that noise recording and modelling is measured using sophisticated computer algorithms.

As part of our work, ICCAN is examining the way noise is reported by the by the aviation industry, including the noise metrics that are used. Metrics are a way of quantifying the relationship between the measured sound and the typical human reaction e.g. annoyance. Noise metrics for aviation have been investigated for over 70 years and this has resulted in many different metrics. See our review of aviation noise metrics and measurement. 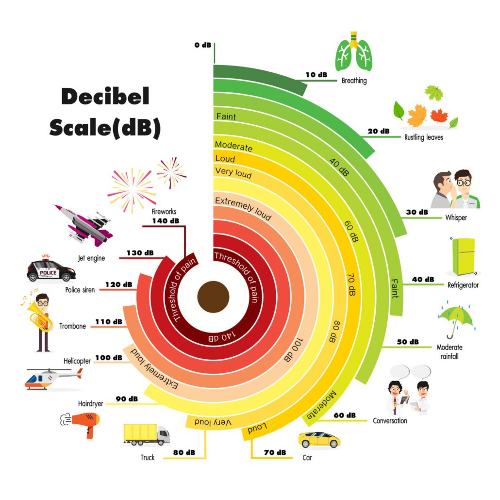 Decibels (dB) are units used to measure the intensity or power of a sound (essentially, how loud a noise is). Decibels are measured on a logarithmic scale, which is a scale where the units on an axis increase by multiples of ten (other examples of logarithmic scales include pH, which measures acidity, and the Richter Scale for earthquakes). A logarithmic scale is used as it better represents how we hear sound levels, although the relationship between hearing and dB is not exact due to the way that the brain processes sound. Due to the use of a logarithmic scale, small increases in dB values can represent significant increases in noise energy. This can make it challenging to appreciate how changes in dB levels relate to changes in the actual noise perceived. This is a significant complication when communicating noise information, including some metrics, to the public.

How do we Measure Noise? 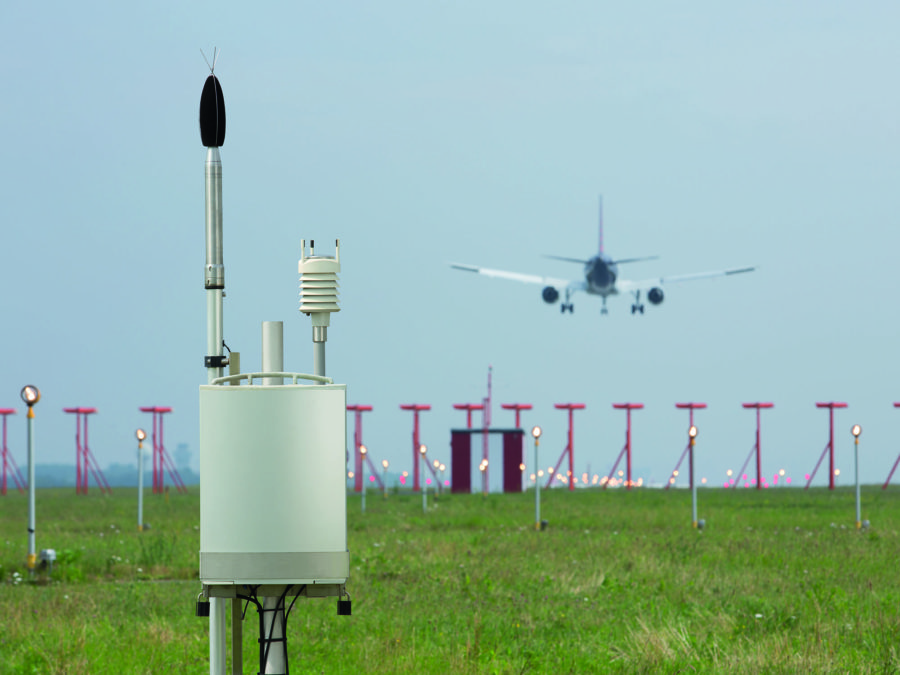 Many airports measure sound using purpose-built sound level meters, often known as noise monitors. These consist of high-tech microphones that are designed to capture the sounds made by aircraft flying overhead. Noise monitors are high-precision instruments which are serviced regularly. They remain in one place for extended periods of time in order to collect lots of data, providing an overall reading of aviation noise.

There are handheld devices and even apps for mobile phones which measure sound. The noise monitors used by the aviation industry are much more accurate recorders of sound than the smaller hand-held devices or phones. This is for a number of reasons, including the way that microphones in phones are designed to reduce background noise. Positioning of the microphone during monitoring is also important to achieve reliable results.

The sound is measured to provide a description of a particular sound environment. This measurement can provide information not only about the level of the sound but also its characteristics (for example, how long and loud the sound is and how often it occurs). From the data captured, the effect of the sound is described by comparing it with established relationships for physiological and psychological responses, such as annoyance, for a typical human reaction. Decision-makers use this calculated noise impact to identify methods which can be implemented to lessen aviation noise at the source and reduce the impacts from noise.

The Properties of Sound

Measurements of dB levels on their own do not sufficiently represent people’s experiences and perceptions of aircraft noise. This is because sound is made up of:

Sound is made more complicated by human perception and the psychology of annoyance. For example, even if the dB level of an aircraft and another noise such as a washing machine were similar, the annoyance factor of the different sound events are likely to be perceived differently. This is because:

These reasons are why “noise thermometers”, which try to match specific dB levels to everyday events, can be unhelpful or even misleading. Noise metrics have been developed to try and create a more representative way to quantify noise exposure as it would be experienced by a person.

All aircraft produce noise. The noise produced varies between aircraft types and even between aircraft of the same model. How this noise is received (by a person or microphone) at ground level will also vary. 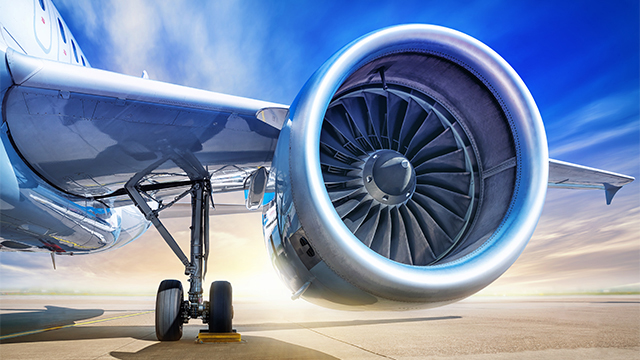 As you might expect, most aviation noise is caused by the engines. As well as moving parts making sounds, hot air is pushed out of the engine at a high speed, causing friction as it moves through the stiller, colder air around it.

Some modern bypass engines (engines with a large turbofan) are quieter than older aircraft engines because they interrupt the friction between the hot and cold air with a layer of cold air that moves at a medium speed.

The Aircraft Body (or airframe) 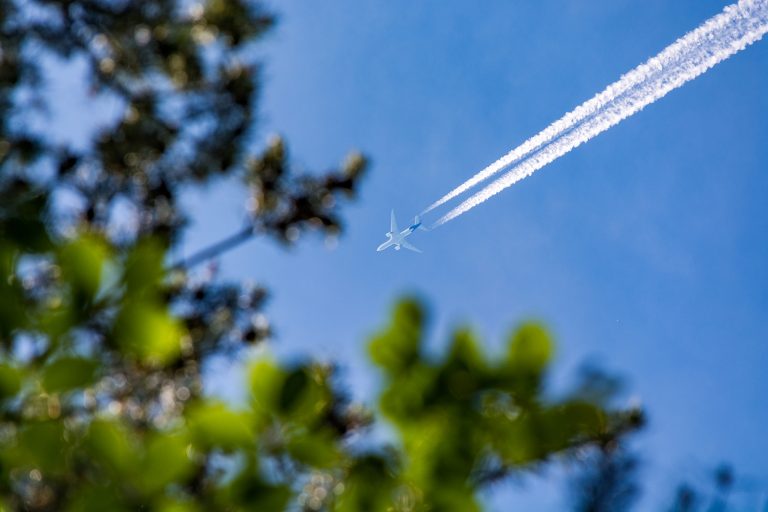 Temperature, humidity, rain, cloud and wind speed all affect the sound produced by an aircraft in flight and how we perceive the noise on the ground. Different types of weather can cause sound waves to echo, making aircraft seem louder. This echoing of sound can sometimes mean that aircraft can be heard from an altitude when they might normally be too high to hear.